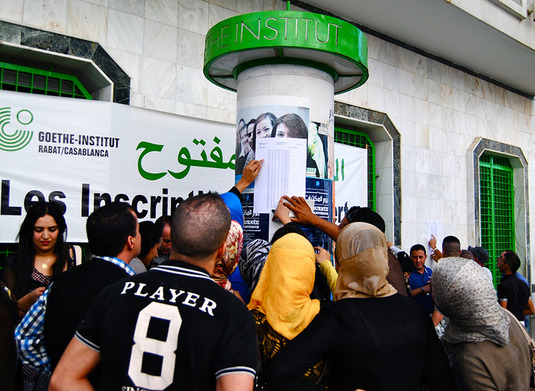 "European borders on a sheet of paper"

Rabat, Morocco (September, 2012): It’s a Saturday afternoon. The sheet of paper fixed on the pillar will decide about the future of all the people trying to find quickly their number on it at this moment. The list contains the results of the exams for the German language certificat A1. The tests have taken place on that day like almost every month at the Goethe-Institute, the German cultural institute. These Moroccans have a husband or a wife in Germany. But if they want to live there together, they need a visa and to receive it, it’s obligatory to have this certificate A1. That’s what migration policies require for people from so-called „third countries“ who are married with a German citizen. This result is not just about if they have reached level A1 or not, it is also about if they can go to Germany or not and that means if they can live together with their partner in the near future or not. (You can find more information about the incident described above on Transformation-Blog.com; the doctoral project behind this picture) 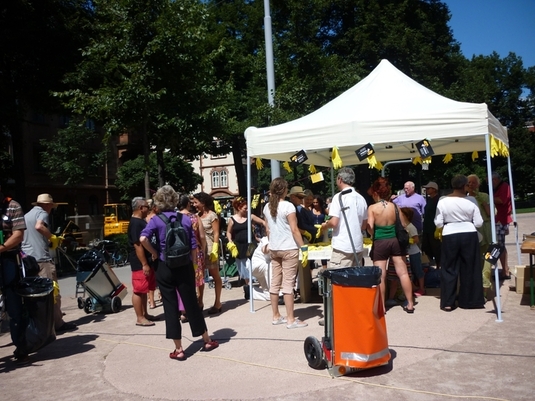 Basel, Switzerland (2013): The picture shows a cleaning campaign in a neighbourhood district of Basel. The cleaning campaign was organised similarly to a Flashmob. Facebook, flyers and other media were used to draw attention to the event. At the day of the activity, a gazebo tent was put up at the weekly neighbourhood market. At the tent, people could get yellow plastic gloves, serving both as a protection and as a symbol of the cleaning campaign. At 1 p.m. a group of about 60 people started their march, collecting rubbish along a quiet side street. After a while, the collected rubbish was put on a pile in a park, group pictures were taken and the rubbish was removed. The cleaning campaign ended with a get-together with drinks and snacks. Alongside the cleaning aspect, neighbourhood events such as this one can be seen as a strategy of turning coexistence into togetherness and of producing – to speak in the words of Arjun Appadurai – „local subjects“. Events can be a means of (re)activating the feeling of neighbourhood and of being neighbours. (The doctoral project behind this picture.)

Javalí Nuevo, Spain (May 2014): The picture shows the sixth atempt by the state authorities to remove the family of Loli García and Antonio Ortega from their house in Javalí Nuevo, a village outside of Murcia. The official eviction date was scheduled for 9:30 am. A group of local activists from the “Plataforma de Afectados por la Hipoteca” (PAH), a civil society’s movement which supports people threatend by eviction, as well as normal residents and neighbours peacefully blocked the bailiff from entering the house, chanting and singing slogans of protest. This is anything but an isolated incident. Estimations suggest that there might have been up to 400,000 eviction orders since the European economic crises first hit Spain in 2008. (You can find more information about the incident described above on Transformation-Blog.com; the doctoral project behind this picture) 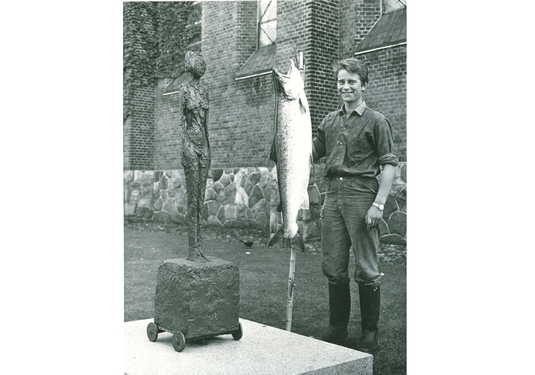 Holstebro, Denmark (June 1967): In the summer of 1967 university student Vagn Ove Bendtsen caught a 30 pound salmon in the great river, that runs through the borough of Holstebro.

The local newspaper put the story on the front page along with a picture of Vagn, his fish and the new pride and joy of Holstebro, the sculpture "Woman on Cart" by the Swiss artist Alberto Giacometti. For centuries angling had been a popular pastime and the city's number one tourist attraction.

However by positing Vagn next to the sculpture the photographer makes the viewer aware of a new Holstebro. In 1967, a year had gone by since the unveiling of "Woman on Cart". And after heated debates about the artwork itself and its costs, it was now widely accepted as the new symbol of Holstebro as a city of art and culture. (The doctoral project behind this picture.)

Sibassor, Senegal (July 2014): African migration is a complex phenomenon. The picture shows a group of woman walking and searching for something in a typical African landscape with the Baobab tree. Since the 1990s Senegal has become a country of emigration in reaction to a economic crisis. France, Italy and Spain are the most important countries of destination in Europe. Migrants from Senegal have different profiles and motivations, according to the departure conditions, experiences, expectations and needs. The ‘empowering’ effect of migrations contributing to transformations of gender dynamics and sexual hierarchy within the traditional society of origin. Research issues included the following questions: What are the roles of women in Senegal? What is the relative status of women and men in Senegal and in European countries of destination? How have women’s education and new role affected their opportunities and lifestyles in this global society? (The doctoral project behind this picture.) 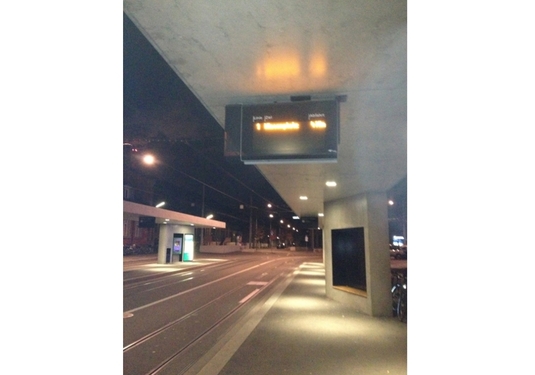 Basel, Switzerland (February 2012): The electronic display of the train station “Bahnhof St. Johann” on the picture says: tram number 1 arrives in four minutes. This confuses some people at the station. They are not waiting for tram number 1. They want to get on bus number 21. Confusion rises: “The arrival of the bus is not indicated, but the one of the tram is? Are we waiting at the wrong place?” The new night network for public transport in Basel was adapted to the infrastructure of the normal daily network. Yet during daytime bus number 21 does not cross here. Therefore it cannot send its information to the display. Infrastructures create and rearrange movements and rhythms in Basel. They cause a lot of emotions and spontaneous communications that become part of the infrastructure itself and co-constitute the city at night. (The doctoral project behind this picture.)

"Transmutations of the immaterial"

Graz, Austria (2013): In my thesis, I trace the trajectory of knitted „processes-made-things“ (Coupaye 2013) and I look at knitting as a practice materialising (relations of) relations between yarn, needles, pattern, cut and the knitting as well as wearing to-be body. I see knitted form as rooted in numeric thought which is itself based on rhythmic, tool-underpinned movement – as illustrated frozen in time in the left half of the picture.

Theoretically speaking this part of my research contributes to anthropological debates on the emergence of form (e.g. Ingold 2013, 2011). Pointing to the specific material qualities of the textile thread, I argue, an oscillation between what is conceptualised as morphogenetic and hylomorphic models is at work.

While form certainly develops from the practical engagement with the materials and from joining the flow of the materials (Ingold), this engagement is always underpinned by intentions which are themselves grounded in social relations (cf. Gell 1998). (You can find more theoretical input about the theme described above here; the doctoral project behind this picture) 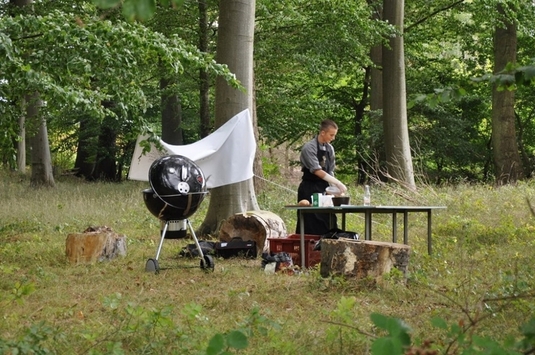 Knuthenlund, Denmark (August 2013): The picture shows a so-called picnic-to-go, an event part of a rural food festival. With a ticket and a plate visitors walked around the manor's area and enjoyed different dishes at different locations. Locally produced food and culinary traditions have become part of the central focus in rural development. In the so-called 'new rural paradigm' local social and cultural values are central to development, but what are the implications, when the 'local' is made in to a development strategy? This particular festival, the "Native Cooking Award", revolves around a competition between professional chefs to use local products in their cooking. On the other side, this is an example of the crisis of conventional farming, as price competition and production costs are rising, producers seek other business activities. (Picture by Dr. Jeppe Høst)

Our doctoral program “Transformations in European Societies” is a joint project of European Ethnology as well as Cultural and Social Anthropology institutes and departments at the universities of Basel, Copenhagen, Graz, Inverness (University of the Highlands and Islands), Munich (Ludwig Maximilian University), Murcia, Tel Aviv, and Zagreb. The slide show above outlines some of our doctoral students’ research.